How the West heard of Romania’s Orphans

After the regime of Ceausescu’s communist dictatorship fell in December 1989, Romania opened its borders to the West. This opened the doors to the international media that reported the plight of the country that had fallen into economic disaster. Images were shown on TV of its many thousands of children who had been abandoned to orphanages and neuropsychiatric institutions (we have no exact figures but reports state between 100,000 – 300,000 in institutions at that time).

In the 1980’s just prior to Ceausescu’s fall his aim was to free Romania of its world debt and proceeded to export all profitable items including the nation’s resources of food. This led to widespread hardship for the people of the country for many years and still continues to impact on the country’s economy. There were extreme food shortages across the country in all towns and cities, which caused great civil unrest.

The old abandoned Children’s Neuropsychiatric Hospital, housing 1310 children at its height, here and in outbuildings around the town of Siret.

As a result of the images seen on western TV many small charitable organisations entered Romania to help in response to the crisis the country was in. The first volunteers who came to Romania in the early 1990’s found children living in dire circumstances.

Children in the institutions were found to be in states of malnutrition, extreme neglect, privation and victim of abuse. All institution facilities across Romania were under resourced. There was a lack of human resources to care for their individual needs (one carer to 20 or 30 children) and a lack of material resources such as essential food items, running water, electricity and inadequate heating systems to counter against the harsh Romanian winters.

Extreme conditions were found across the country in shortages of essential food items, bread queues of two hours or more, lack of essential resources such as medical and water supplies, petrol, gas and frequent power cuts. The country was in economic disaster and a resulting high inflation lead to the local currency Lei becoming valueless. Staff of state run institutions would often work for several months at a time without salary and no reassurance that their full wages would be backdated. Siret Orphanage

Why So Many Romanian Orphans?

During Ceausescu’s dictatorship, he declared his intention to substantially increase the population of Romania to build a strong Romanian communist workforce. To implement this he decreed by law that all contraception and abortion were banned. In addition, all women were to give birth to up to 5 children or incur higher taxes. Many underwent enforced fertility checks over seen by the notorious Securitate police, figures estimate approx. 10,000 women died as a result of attempts at self termination (film Children of the Decree (2004), Director – Florin Iepan).

Many families could not afford to keep all their children or had children which were unwanted and were encouraged by the state to hand them over to the state run orphanages. They were informed that they would be taken care of and adequate food, shelter and education would be provided.

Romania has progressively worked towards change since 1989 and many improvements can be seen through the implementation of social care reform in prevention measures of foster care services and community mental health care plans.

Unfortunately, the country’s economy still struggles and this still has a direct impact on the institutions and orphanages. The move towards EU accession in preparation for the Euro alongside austerity measures in more recent years saw huge price rises making everyday items taken for granted in the west far outside the average Romanians price range. This has had a direct impact on charitable organisations such as School For Life Romania in continuing the valuable work it does.

These children were housed in large orphanages with approximately one carer to 20-30 children. Many children failed to thrive in these conditions due to lack of parental nurturing, adequate nutrition and stimulation. As a result, many developed severe developmental deficits and delays, which inhibited healthy development and ability to communicate, socialise and survive outside of institution life in the wider community.

The ones showing the most severe problems were transferred to neuropsychiatric hospitals for children, such as the infamous institution in Siret. In 1984 at its height, this institution housed approx 1310 children. Many are now permanently damaged by their traumatic childhood experiences and will always need a supportive and caring living environment. 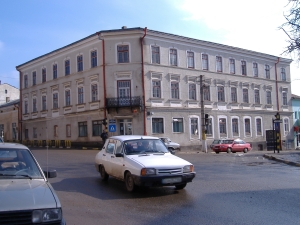 In 2003, residents in the Neuropsychiatric Hospital for Children that were from Suceava County were move to this building. Others born outside Suceava were transferred back to their home counties or became homeless if deemed by authorities able to fend for themselves.

These now young adults are living in an adult psychiatric institution and supported housing in the town of Siret. They were moved there from the original neuropsychiatric hospital for children housing approx. 510 in 2003. Many of the young adults at that time were returned to institutions in their home counties across the country or became homeless.

They all show extreme courage and strength through their will to participate, communicate, socialise and explore new experiences when given the opportunity with another person.

Many of these children if they had grown up in family homes would have had a normal healthy development and life experiences enjoyed by most.

2013 saw the completion of one of the two new hospital buildings that some of these now young adults have moved to from the main hospital. In 2014 all residents moved to their new homes. 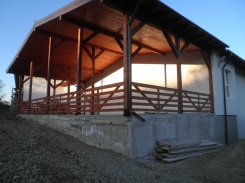 The second new state hospital building where many of our students have moved to in 2013/2014.